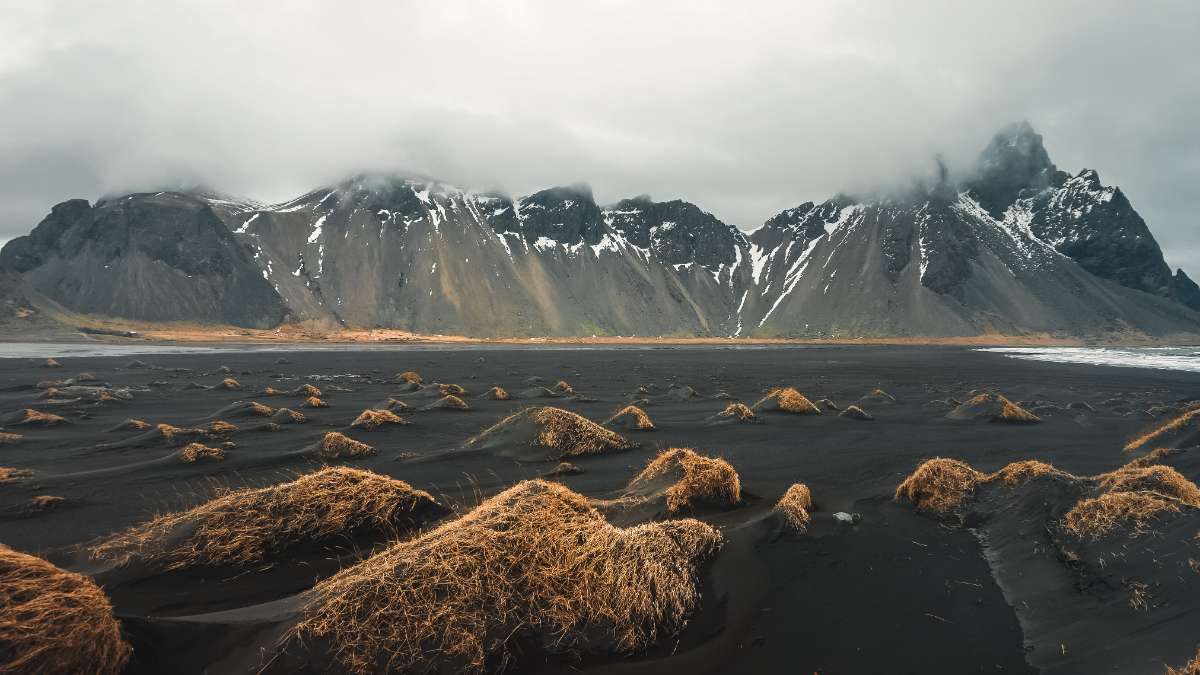 Iceland is well-known for its magnificent and uniquely diverse scenery. In this article, we take a closer look at how this Land of Fire and Ice came to be and the Iceland landscapes you can look forward to on your next trip.

From icy glaciers to glowing red volcanoes, Iceland is an island of extremes. To properly appreciate the Iceland landscape for what it is today, we first need to go back to the beginning.

The Iceland Landscape: An Origin Story

The Iceland landscape started forming 60 million years ago. What is now known as the second-largest island in Europe, Iceland began as the Eurasian and North American plates started moving apart. These tectonic shifts caused an upsurge of abnormally hot rock in the Earth’s mantle and lead to multiple eruptions. The lava that came spewing out into the ocean, rose to the surface and cooled down. As an interesting side note; this original pocket of Magma known as the Iceland plume is still beneath the island to this day.

But unlike other islands, Iceland has not stopped forming. Continuous volcanic activity is still sculpting the Iceland landscape nowadays. Between eruptions and melting ice, it’s an ever-evolving country that may never offer the same views twice. 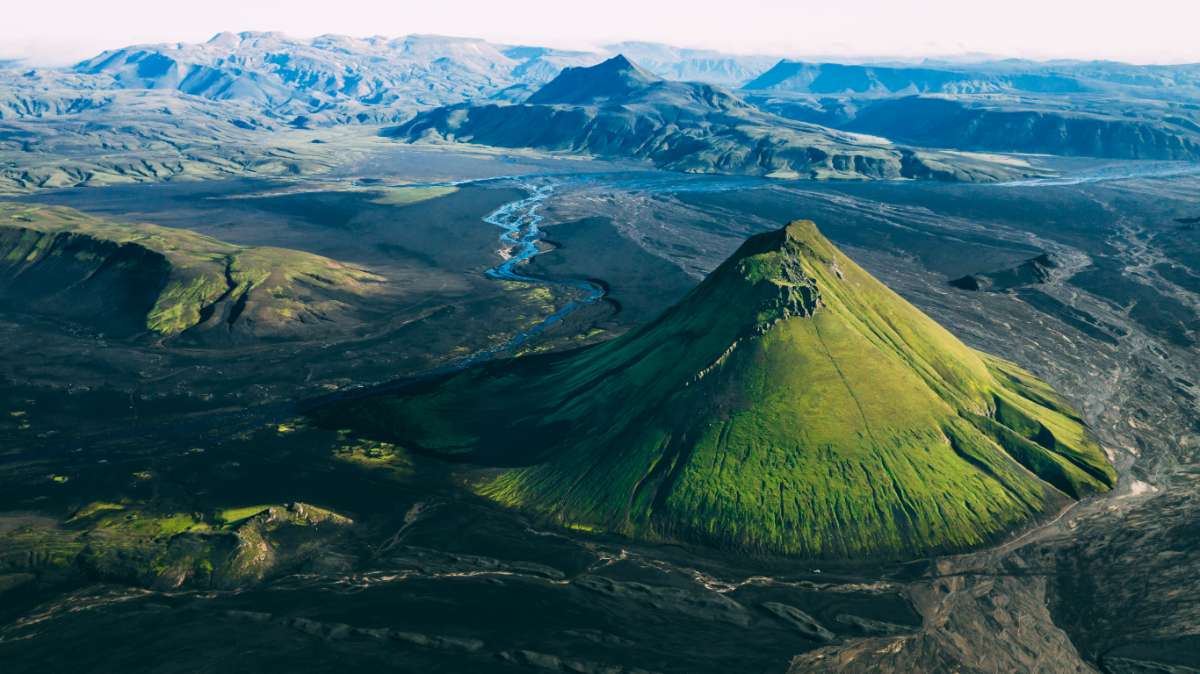 The Land of Fire…

Iceland is a hotbed (pun intended) for volcanic activity due to its origins, and this has had a profound impact on the Iceland landscape.

This is the starting point when talking about Iceland’s volcanic landscape. There are roughly 130 volcanoes on the island, many of which are still active. On average, Iceland experiences an eruption every 4-5 years.

But unlike the volcanoes in the Hollywood movies, the eruptions consist of a little less erupting and a bit more flowing. So, scenes with fleeing island villagers dodging huge red-hot rocks are not something that is a common occurrence in Iceland. In fact, volcanoes are the piece de resistance of many tours offered on the island! Even the ones currently erupting, such as Fagradalsfjall.

There are also many hiking trails that give you a closer look into an active or dormant volcano. The most famous ones are the volcano trail close to Grindavik and the Hekla hike near Landmannalaugar. But when doing a hike by yourself, please keep in mind that you should never walk on the lava (even if it looks completely cooled and rock solid!). You don’t want to be the visitor who takes the step that crunches through the hardened exterior and melts your foot away in the piping hot lava interior.

A few of the most famous volcanoes on the island are: 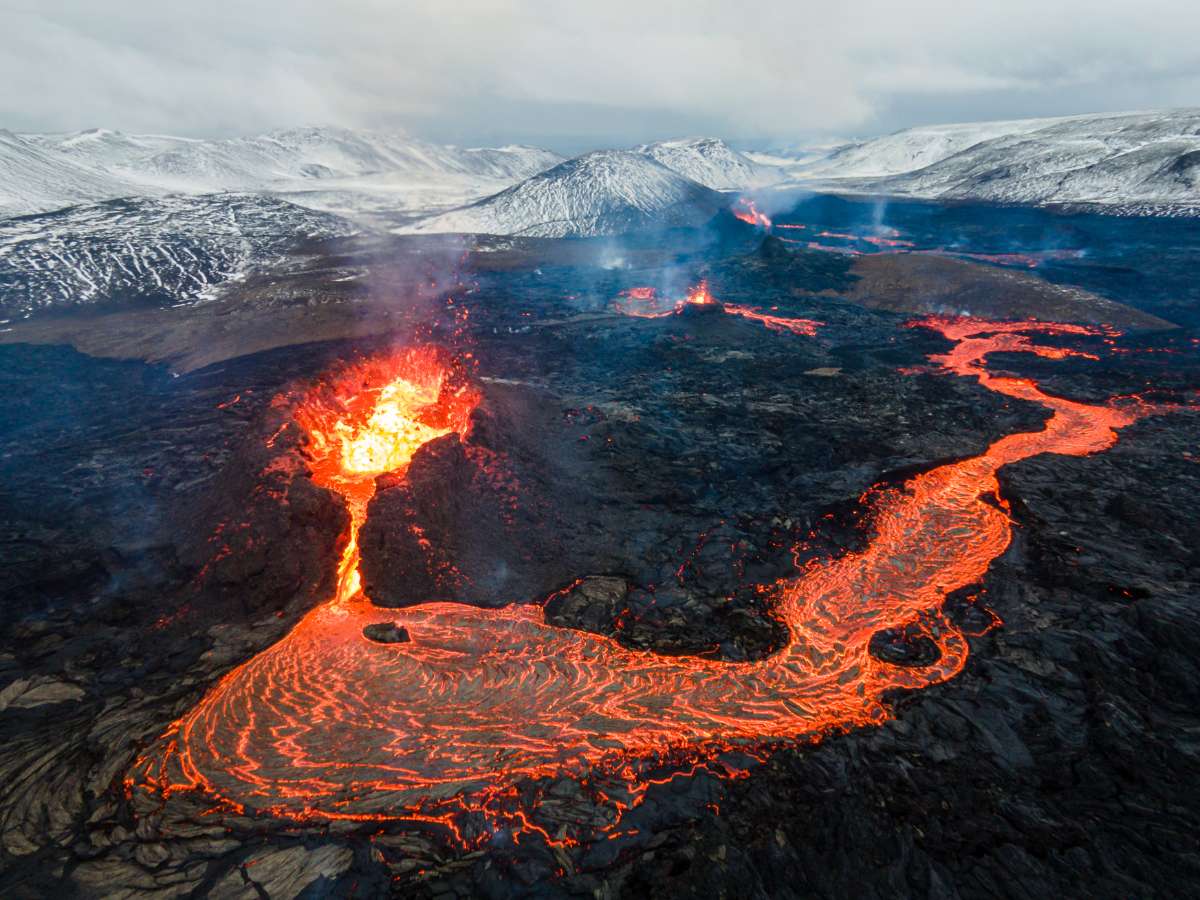 Due to all this volcanic activity on the island, Iceland’s underground water supply is naturally being heated. That's why you will find hot springs all over the country. Some of these hot springs allow you to take a dip in their natural surroundings, while others were far too hot for human use. Unless you were planning on boiling something...

But the latter were quickly utilized and turned into geothermal public pools. Icelanders either used a cold water source close by (a lagoon or river) or another man-made solution to cool down the water. These hot springs are popular among visitors, especially for those with dermatological problems. Many swear by the healing and curative powers of the mineral-rich water.

But whether you’re looking for a skincare treatment or just want to relax in the hot water looking over Iceland’s beautiful landscape, you’ll find the hot spring spot for you. Some of the most popular Iceland hot springs to visit include: 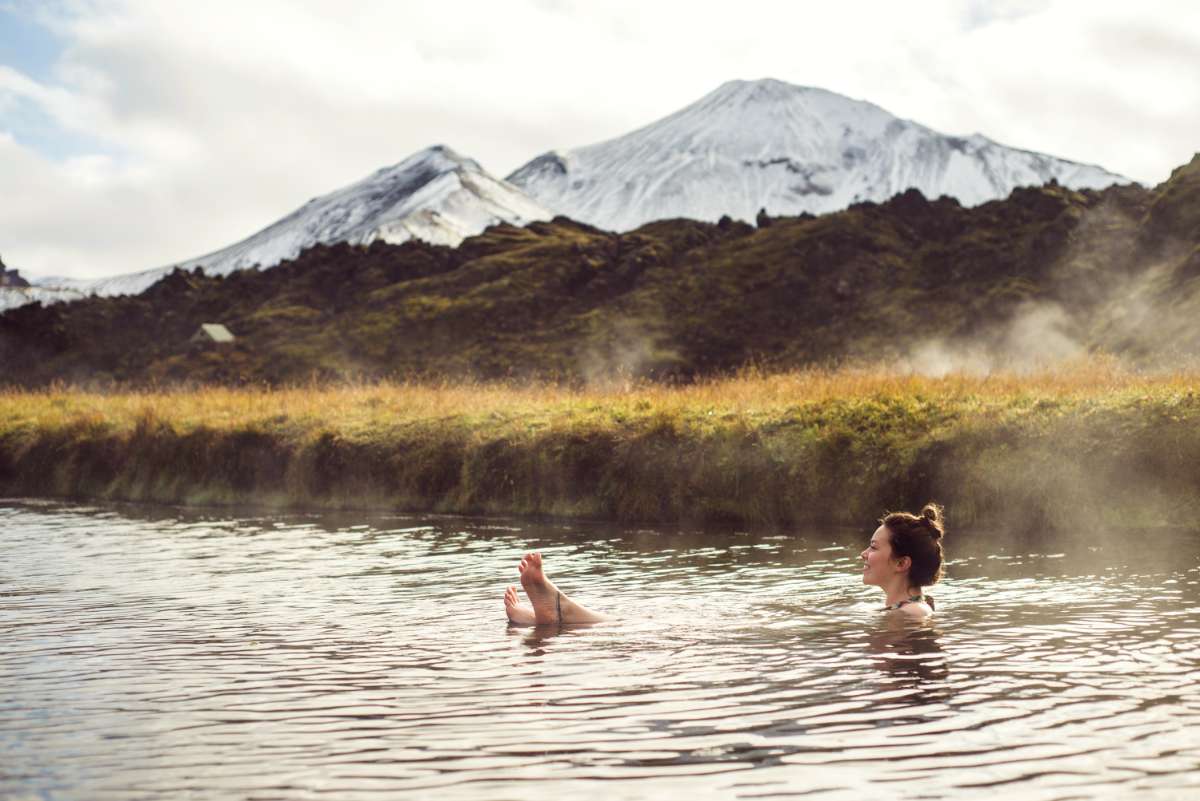 The black sand beaches in Iceland are formed when hot lava that’s crossing the land finally meets the cold ocean water and cools down. When cooled, it forms a black sediment that gets broken down into fine black sand by the water and waves. It might not be the white sandy beaches of the Caribbean inviting you to sit down and sip a cocktail, but anyone who has ever visited one of these black sand beaches can attest to its breathtaking beauty.

And whilst you might be tempted to take a dip, we would strongly recommend that you keep your bathing suit firmly holstered. Especially during the summer months in Iceland. Even the locals are weary of taking on the black sand beach waters due to the incredibly strong currents. If you want to say that you’ve swum in the sea on a black sand beach, Myvatn will be your best bet. A few of the most famous black sand beach spots in Iceland are: 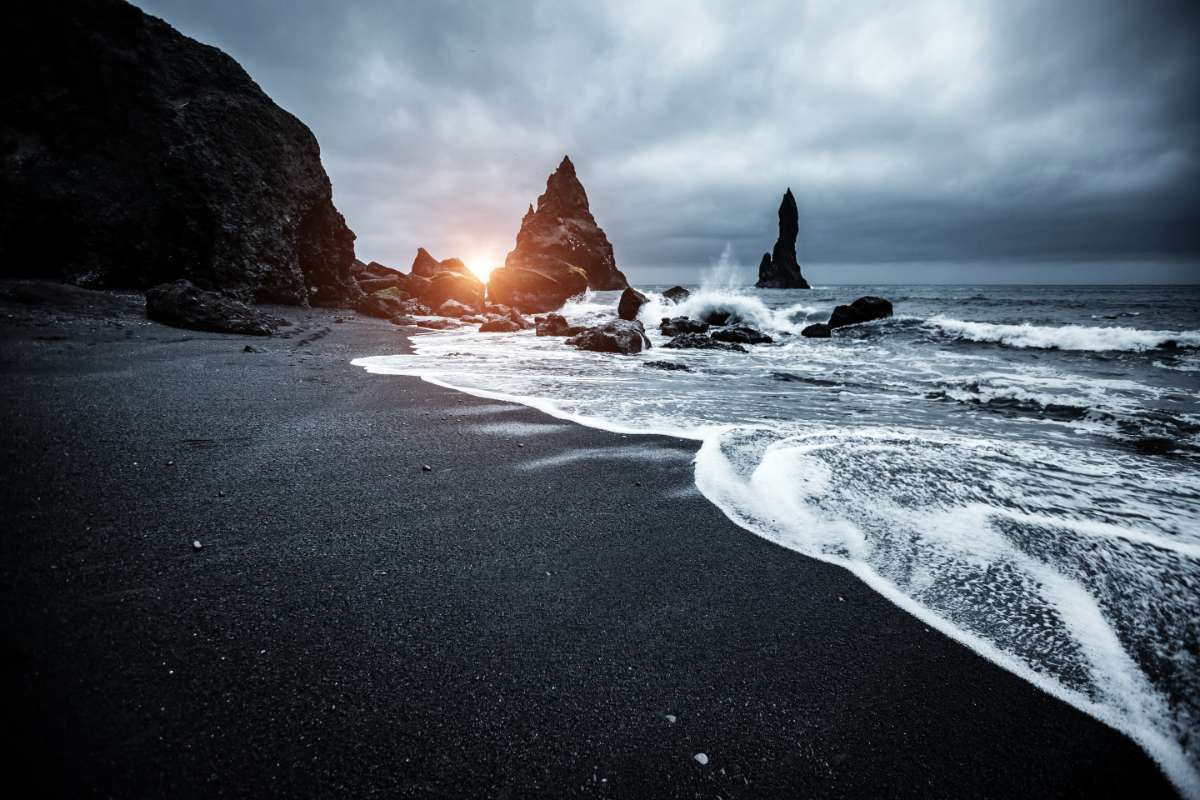 Another unique feature that can be found all over the island is the Basalt columns. It’s hard to believe that these impressive cliffs and rock formations are also the results of lava. But unlike the black sand beaches that cool down rapidly when hitting the cold water, the Basalt columns take time.

The lava starts cooling once exposed to the cold air, and over time it cracks and forms these beautiful hexagonal shapes. Many of the Basalt columns can also be seen around the ocean and waterfalls. The contrast between the whitewash and the black background is absolutely spectacular. Some of the Basalt Column spots we highly recommend you stop by are: 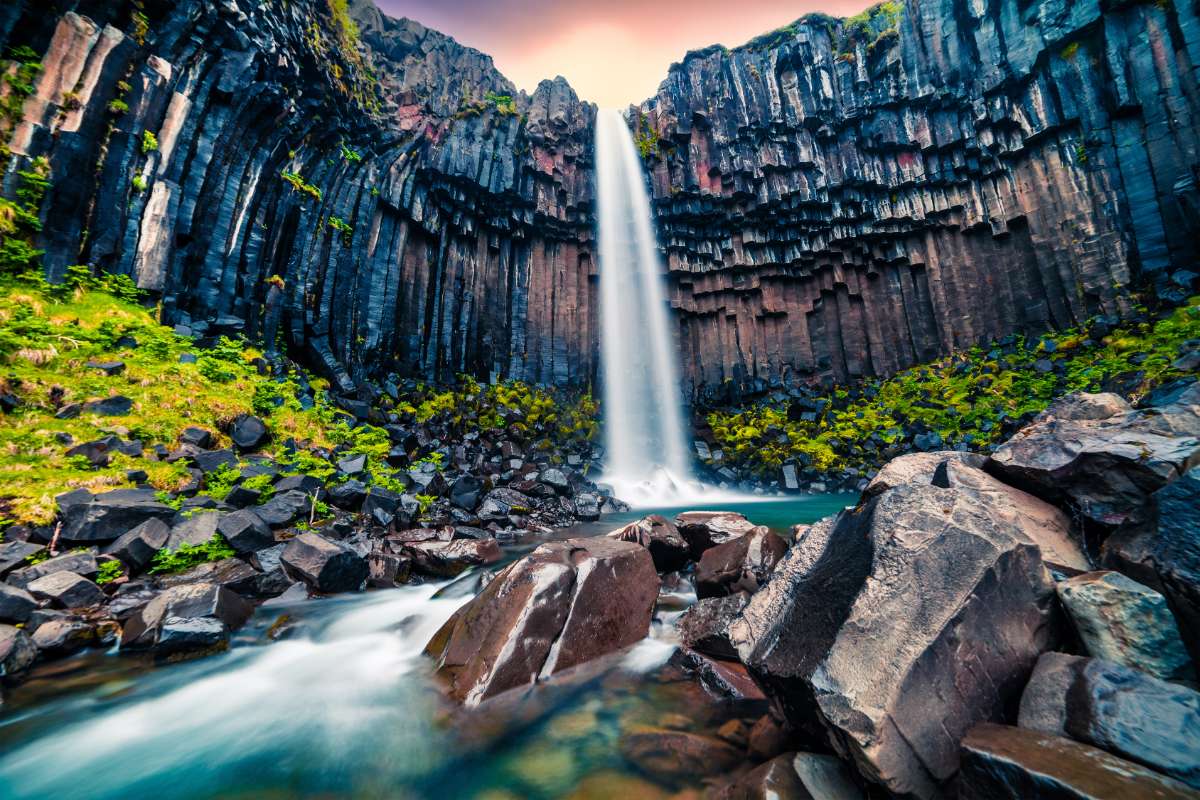 Iceland has three official national parks, after Jökulsárgljúfur and Skaftafell merged in 2008. These three parks are Thingvellir National Park, Vatnajökull National Park, and Snæfellsnes National Park. The volcanic activity that started the rolling hills and the valleys can still be found in some of the parks such as Thingvellir which sits on a volcanic rift, and Vatnajökull which is home to eight volcanoes.

The rift in Thingvellir is known as the Silfra Fissure. If you ever feel the need to float between two continents, this is the place to do it! The Fissure is created by the Eurasian and North American tectonic plates pushing away from one another. The fissure that is filled with natural spring water is a world-famous snorkeling and diving spot. 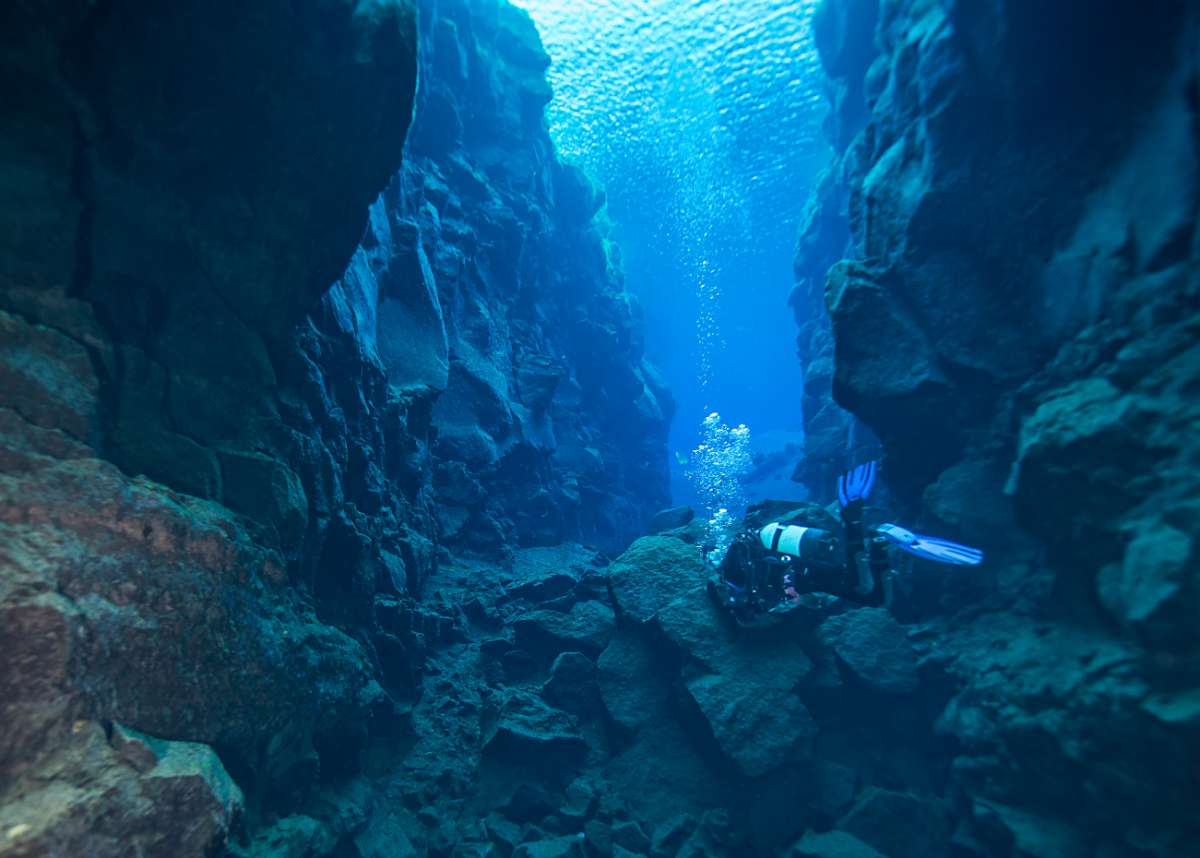 The flip side of the coin is Iceland’s…well…ice, and even this has its roots in the island’s volcanic activity. Let’s take a closer look at the icy Iceland landscape.

Glaciers are prevalent around the island and make up 11% of Iceland. A glacier is created by condensed snow melting and sublimating over many, many years. What does this have to do with the volcanic activity on the island, you may ask? Well, most of the melting in Iceland is done by the same volcanic heat responsible for the hot springs.

Between volcanic activity, global warming, and shifting tectonic plates, you will also find glacier lakes in Iceland such as the famous Jokulsarlon Glacier Lagoon in Vatnajokull National Park. Unlike popular belief, the glaciers are not just part of Iceland’s winter landscape, but can be viewed all year round.

From snowmobiling to hiking, there are many ways to explore Iceland’s glaciers. Tours come along with a knowledgeable and experienced guide that has your safety as their primary concern. Some of the most visited glaciers are: 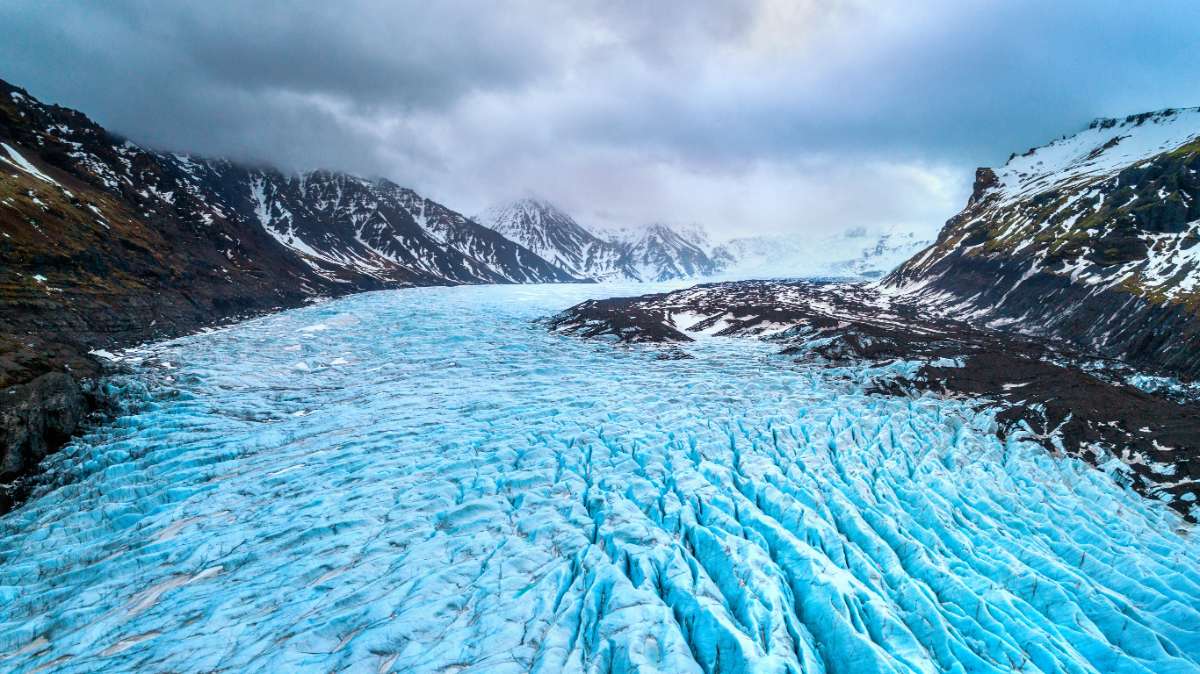 Ice caves and glaciers go hand in hand, and that’s why many tours on the island offer a kind of combo experience deal for both. Viewing the ice caves in Iceland as part of a tour is the only way that you’ll get to see them due to safety concerns. Many ice cave tours are also seasonal, as the ice melts during certain geological events and seasons. The caves can become too unstable for visitors to enter.

An ice cave is essentially formed when a river of melted ice runs at the base or through a glacier. These natural tunnels are further sculpted by winds rushing through them. The ever-changing nature of ice caves also makes this an extremely unique experience, and you are not likely to experience the exact same ice cave adventure twice. Some of the must-visit ice caves include: 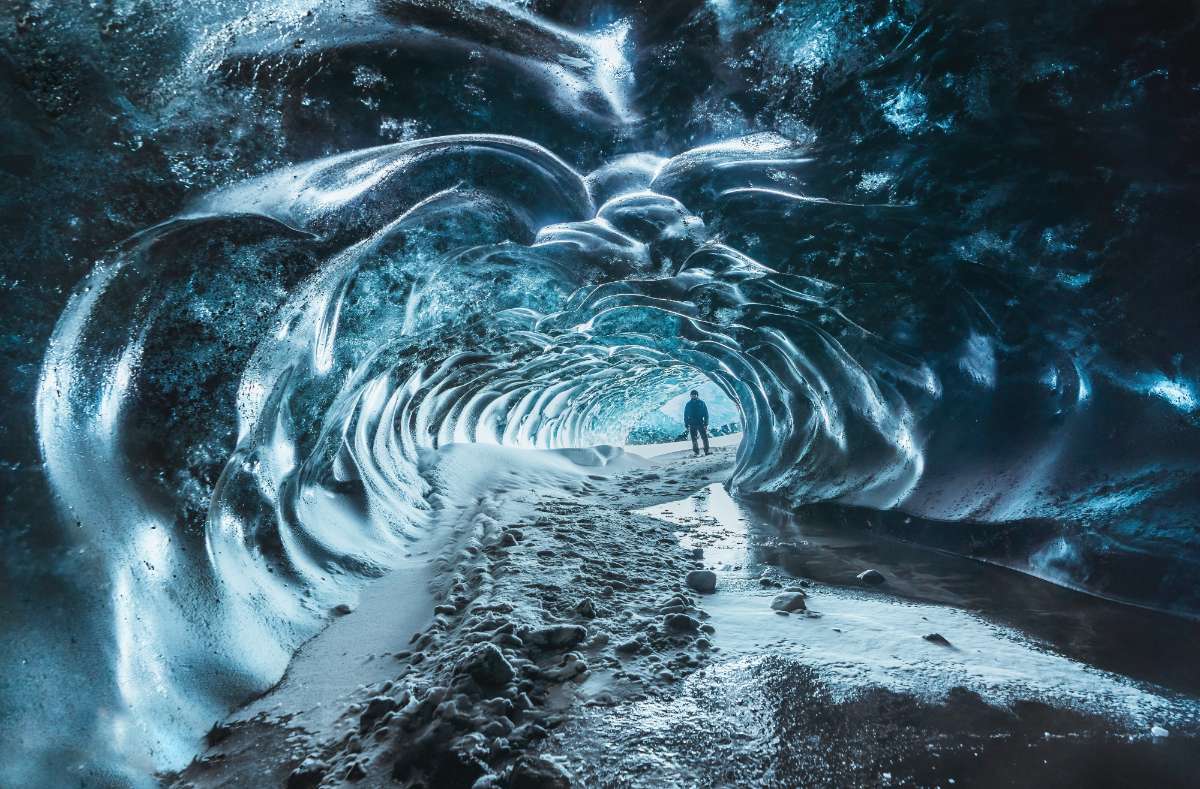 There are roughly 10. 000 waterfalls in Iceland, and they are the direct result of the Iceland landscape. Mountains formed during those initial and subsequent Iceland eruptions along with melting glaciers are what keep these magnificent water displays going. Some of the most impressive waterfalls in Iceland are:

The Human Fingerprint on the Iceland Landscape

It is believed that the first Norse settlers reached Iceland’s shores in the second half of the 9th century. Since then, there have been shelters built and farming started ‘till today, when Iceland boasts quite a few large cities. For obvious reasons, the Reykjavík landscape and those of the other cities do not resemble the more unpopulated areas of the island.

In fact, when walking down Reykjavík’s Laugavegur Street, it feels like walking down the micro version of Oxford Street. There are plenty of boutique stores, bars, and restaurants. And as is the case with most islands and coastal towns, you can also find quite a few harbors and waterfronts. The main ones are the Reykjavík Harbor, the Akranes Port, and the Reykjavík Waterfront. 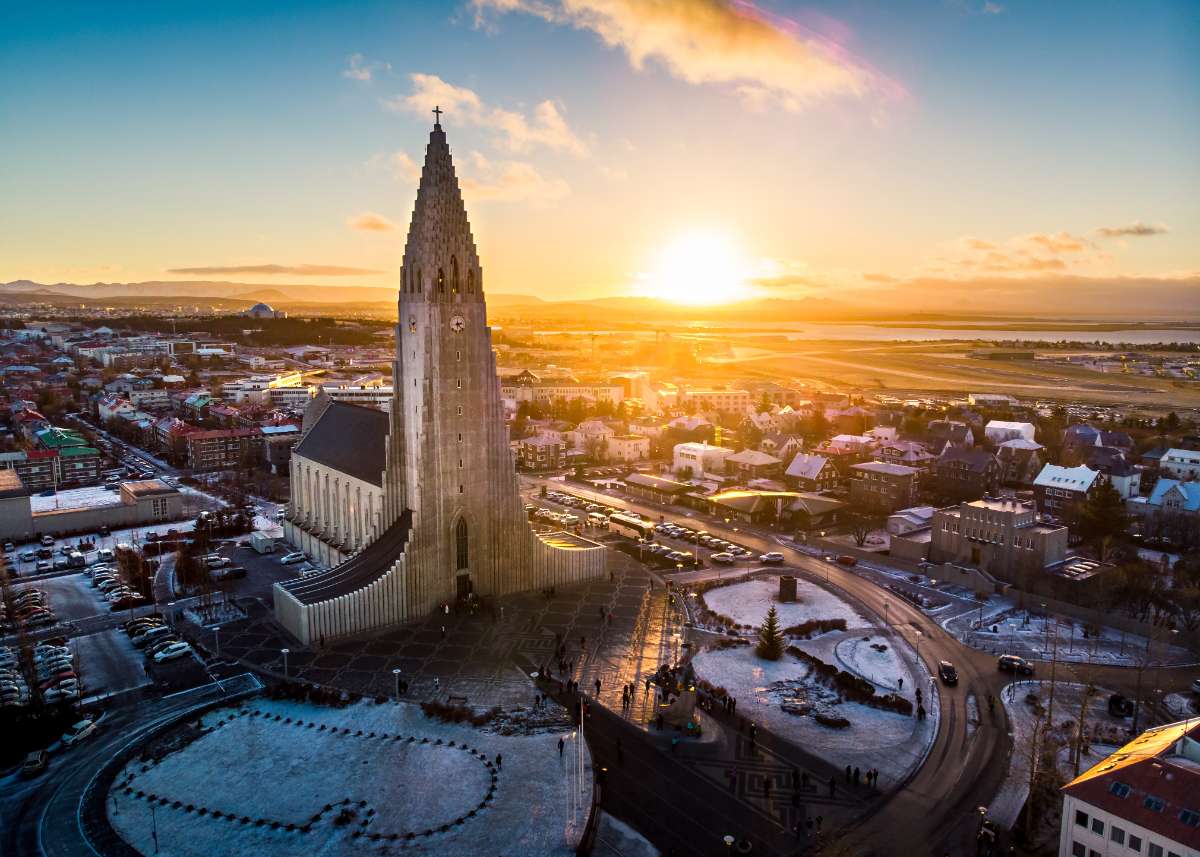 The Iceland Landscape and its Wildlife

Iceland has its fair share of unique wildlife, and it is its landscape that makes it so attractive to these various critters. Some of the wildlife you can spot on the island is the Puffins, the Arctic Fox, Seals, & Whales. These are some of the reasons why the Iceland landscape is perfect for these animals:

Puffins: They want to nest on rocky cliff sides away from potential predators. This makes the Basalt columns all over the country and cliffs such as the Latrabjarg cliffs in the Westfjords the perfect breeding ground. So perfect that 60% of the world’s Puffin population comes to breed in Iceland each year!

Arctic Fox: As the name suggests, these guys are pretty hardened against the cold. You will find most of them in Hornstradir Nature Reserve. Here, (quite conveniently) the winds blow more than enough food to its shores for the foxes to eat.

Seals: The Iceland landscape is like the amalgamation of every dream seal habitat known to man. Including remote fjords, rugged coastline, and a myriad of beaches. Some of the glacier lagoon’s seals will take advantage of the lagoon’s location. It usually provides them with plenty of fish, almost no predators, and plenty of ice to make it their ultimate playground.

Whales: The combination of the cold ocean water and the warm currents makes Iceland some sort of whale food buffet. Whilst many of the species are migratory, there are plenty of species who call the Iceland waters their home all year round. 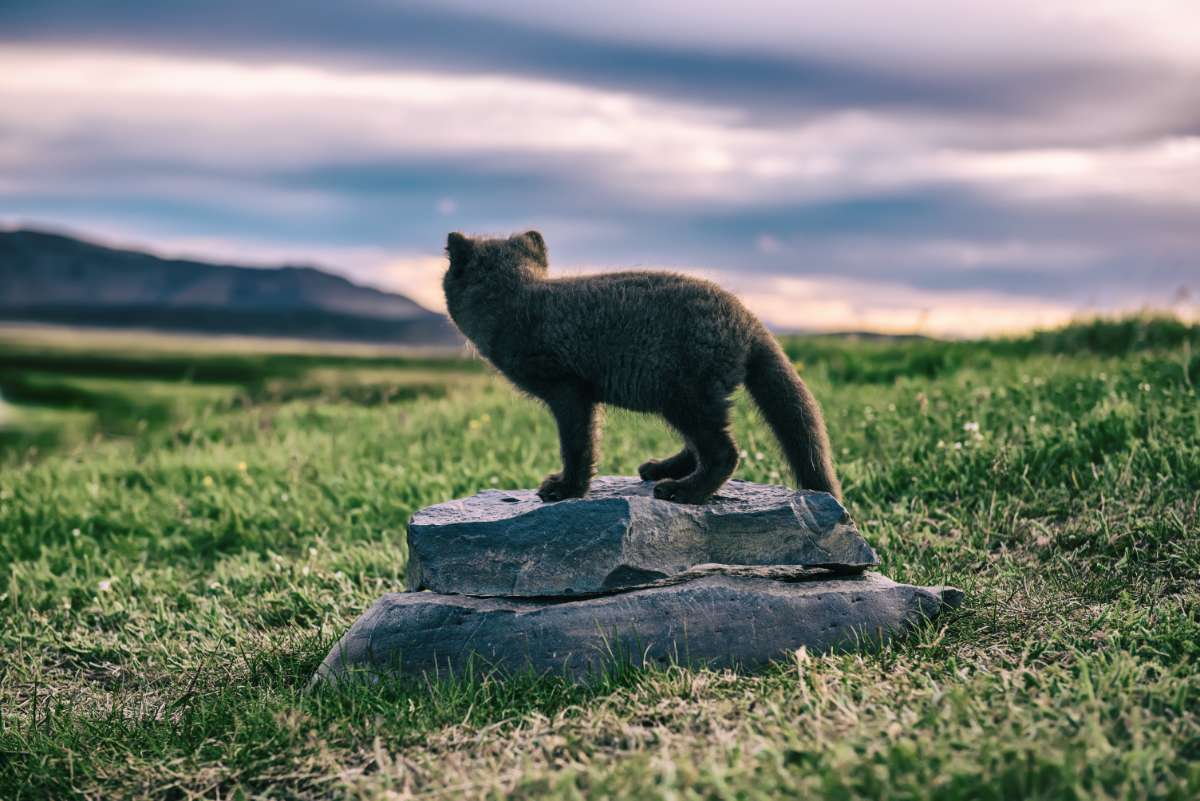 The Best Way to Explore the Iceland Landscape

There’s no doubt that Iceland has a beautiful landscape – from Iceland’s volcanic landscape to its winter wonderlands. It’s abundantly clear why professional photographers, visitors, and researchers come from far and wide to view, photograph, and study its magnificent features. 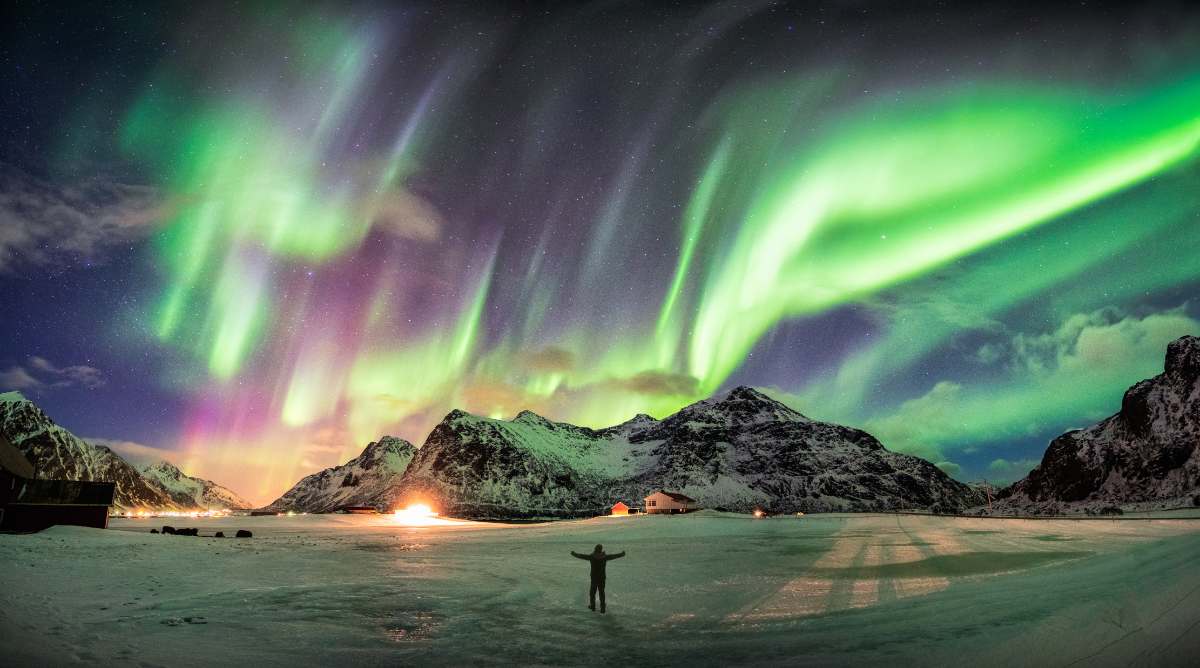 Your Bright Guide To The Northern Lights In Iceland 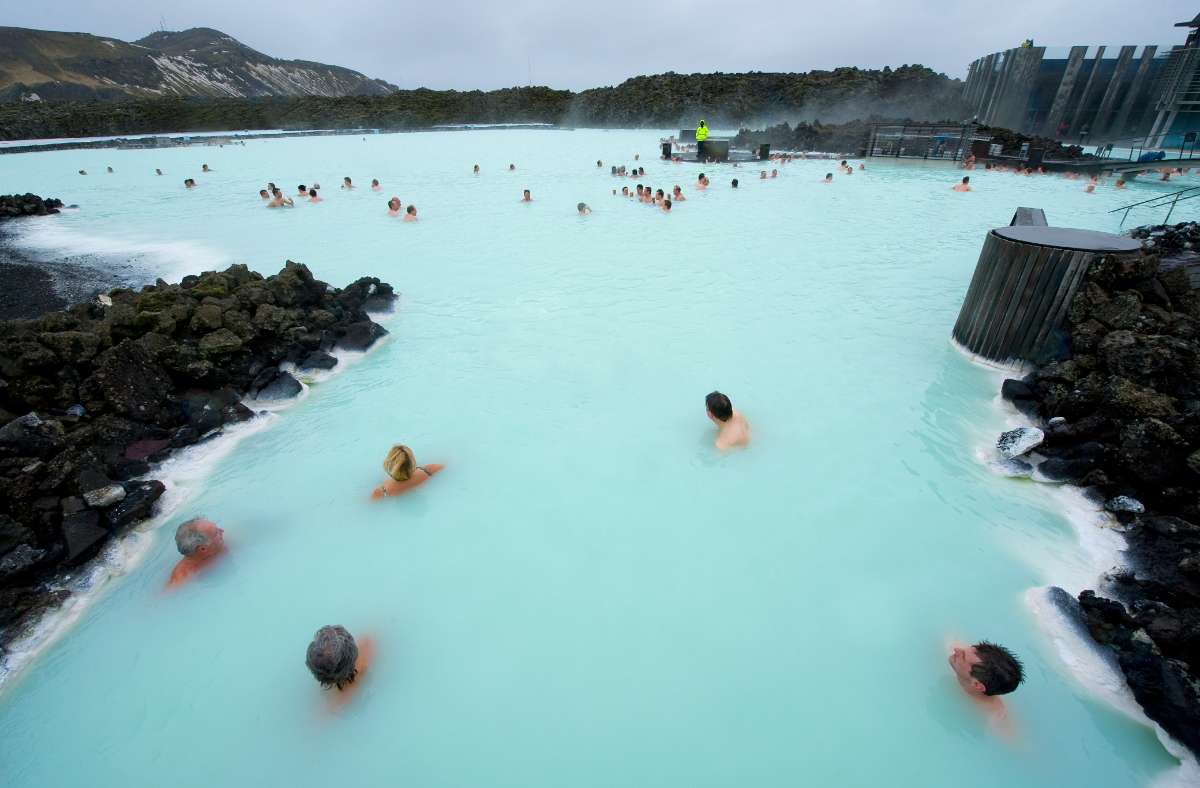 The Magic Of The Iceland Blue Lagoon